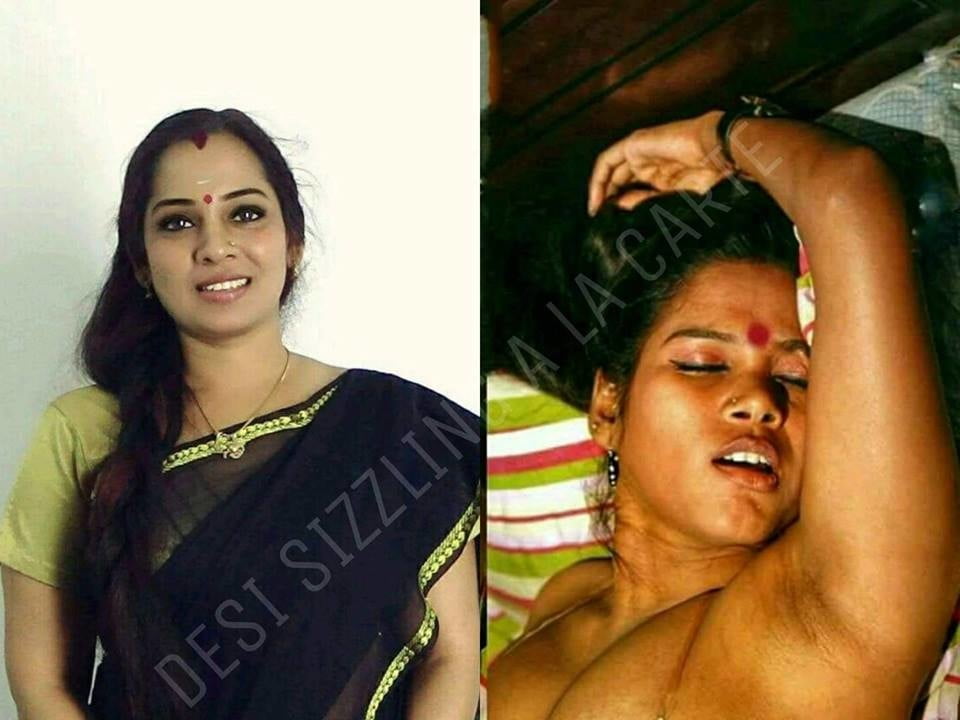 This story is about how my mom was seduced by my neighbor and me getting involved in seeing them.

I was staying in Chennai in a 1 BHK house. I was staying alone and I had an affair with my neighbor’s wife Shruthi. Her husband got to know about this and used it as an advantage to get laid with my mom.

I’m 21 years old doing my B.E. I was staying alone and I seduced my neighbor’s wife Shruthi and used to fuck her whenever her husband was out for work. It so happened that my mom Geena wanted to visit me as dad was going abroad for some business purposes.

I told my mom to take rest and I had a 15 minutes work outside. I locked her from outside and went to Rani’s house. Rani had two young k**s and we usually used to have in sex in the afternoon when her husband Nirmal was at his shop.

So out of desperation I directly made her turn around lifted her saree up pulled her undies down and stuck my semi-erect dick in her. She was asking me to stop but it only got me hornier. My dick got harder and bigger and reached its full size and as I was banging her in doggy style.

I heard a noise from the back and when I turned around it was her husband. Both of us were shocked. I pulled my cock out of her and she also pulled her panties up and let her saree down. I was shocked to see him there.

He rushed to her and slapped her and asked her if he wasn’t satisfying her enough. I confronted him by saying that he satisfied her enough but she was doing it for my satisfaction. Then he kept quiet for a minute. Then he said, “Ok I’ll let you bang my wife but only one condition.”

He asked me to arrange a session for him with my mum to have sex with. I didn’t know how to respond and left from there. In the evening Nirmal came to our house and started knocking hard on the door. My mom opened the door and he started asking her if she was my mum. He greeted her and asked if he could come in.

Mom called him in and made him sit down. I realized that it was him and upon seeing me he would ask for a chance with mom. She had a beautiful 36-40-48 body. But Nirmal was here with plan B. Mom asked what was the problem and he said that I used to fuck his wife for money every day and my due was almost 3 lakhs.

All this was new to my mum and she didn’t know how to deal with it. I was standing near the door was listening to all this. Nirmal asked if I was at home. Fearing harm to me, she said I had gone out.

Nirmal also added up that I used to have sex with my neighbor’s wife promising them money but never paid them. And all ladies here wanted me out of the building unless I paid them 3 lakhs. I was wondering to myself what a brat Nirmal was to lie to my mom like this, giving false information about me.

I always imagined to have sex with all the married women in the building and getting them pregnant but it was just a fantasy. I immediately called up Shruthi and told her about this. She told me the best possible solution was to let Nirmal fuck my mom else he would make a big fuss about both of them.

So I kept quiet and stayed inside the room and waited to see what would happen next. My mom told Nirmal that I wasn’t that kind of a guy and that I didn’t have enough money to pay them. Nirmal told Mom that the only option was to pay the full amount or vacate by evening.

My mom was trying to convince him that it would be difficult for the both of us to vacate that early and needed more time to do this. Nirmal told her that there were 8 housewives in this building and I had fucked all of them. If we didn’t pay them back he would tell their husbands about all this and defame both me and my mom.

My mom told him not to do that and she was ready to do anything for a word of silence and some extra time. This was the time Nirmal had to take advantage of my mom. He said, “Alright there is one another way. I can give you time till tomorrow if you get banged by me.”

It was like a total shock for that policy. My mom said, “Anything other than that, please.” Nirmal told her that for what your son has done this is nothing. He has got 3 housewives pregnant here. My mom was shocked to hear this and Nirmal had put her in a position where she couldn’t back off.

I again called Shruthi and told her of all this. She told we’ll have to wait till Nirmal starts banging my mom. Then she would walk in to catch him red-handed to balance the debt.

I was scared as to how my mom would handle all this. Nirmal told Mom that either she lay with him or vacate the whole house by evening. My mom didn’t know what to do about it. Nirmal knew that she was cornered now and it was time for him to fulfill his desires with my mom.

He got up and walked towards her and said to her that I had fucked his life too and it was her time to repay all the debt and he held my mom’s hand. My mom backed off and walked into the room with an angry face. Nirmal also followed her and saw me in the room.

He saw me and said to me that if I don’t let him fuck my mom he knew what the consequences were. My mom asked me what is this. I didn’t have an answer and I just looked down. Nirmal took that as an approval from me for him to fuck my mom.

Mom was embarrassed with what I was doing here. In that gap, Nirmal hugged mom from the back and my mom still resisted him. Nirmal got angry and told me to either convince my mom to have sex with him or that he will anyways **** her. My mom said to him, “I have a husband, you idiot.”

Nirmal told her that if he let her fuck him once he wouldn’t let anybody know anything here. My mom was silent, angry and confused, not knowing what to do. Nirmal thought of another approach.

He told mom, “Ok I don’t want to have sex with you but I have another idea.” Mom asked what was it. He said let your son do what I ask him to do. My mom saw me and said that it’s your karma and you have to deal with it.

I was ok to do anything as long as Nirmal left my mom alone. I said ok. So Nirmal told me to take my shorts off. I didn’t know what was happening but I had to do it. So I took my shorts off and standing there naked in front of him and mom.

Mom looked at me and asked what was he doing. I told her to let’s get done with this mom. She angrily held my cock and started jerking it off. I was confused about what to do. My cock getting jerked was kinda getting me on and my dick was semi-erect in a minute.

Nirmal then told me to climb up the bed and stand there. He knew that by doing so my cock would fit in my mom’s mouth while she was standing. Nirmal then asked her to suck it. My mom was feeling guilty for doing all this but she thought since we had started off it was better to finish it off.

My mom never realized it. She was sucking it hard with her eyes closed. Nirmal with his hard dick came behind my mum and started to feel her ass crack. I thought this was the right time to call Shruti to get her husband out of this. My mom kind of started feeling aroused with Nirmal’s hard cock feeling her ass over the saree she was wearing.

Seeing all this I was getting aroused too. Nirmal asked my mom to keep her eyes closed and let go of my dick from my mouth. He signaled me to swap positions. My mom kept her eyes closed started to feel Nirmal’s cock in her mouth and my dick over her ass.

But she didn’t know that we had swapped positions. Nirmal took advantage of this position and tried to fondle with my mom’s boobs. My mom felt a hand on her left boob and immediately opened her eyes. She realized that I was feeling her ass with an erect dick over her saree and Nirmal had his hands over her boobs.

Nirmal took advantage of this. He told my mom that my dick could get erect when she was with me and what should she expect from him with other women. And lustfully he forced his dick in her mouth saying, “I’ll fuck you right,” started to play with her boobs.

I could hear my mom moan and at some point, felt that she was liking it. At that point, Shruti walked in and only I saw her then. She saw us all in an awkward position. She asked me to lift my mom’s saree up to her hips and make her feel my cock on her bare thighs.

My mom opened her eyes and saw Shruthi coming in. Nirmal told to her see whom he was fucking all these days. Listening to all this Shruthi came near me and told my mom not to worry about Nirmal. Let’s teach him a lesson. Play with your son’s cock and we’ll get Nirmal pissed off like that.

Nirmal seeing my mom in two-piece got a hard on dick and my mom noticed it. I don’t know what happened to her, she directly took his cock in her mouth. Nirmal said to me that I could fuck his wife as much as I wanted and he would do the same to my mom.

I could see my mom getting wet in her pink panties while she was sucking Nirmal’s cock. I saw Nirmal texting someone but I didn’t bother much and concentrated on Shruthi sucking my dick. She took my hand and placed it on the wet part of my mom’s panties.

I could feel my mom so wet. She used to have regular sex with dad but she seemed to be enjoying this as well. Then I saw two more men barge into the room. Apparently, the main door wasn’t locked from the time Nirmal came in and that’s how they all got in.

In the next part, I will tell you how we all fucked each other.