The Hanging
by Denuded Man-berries


I woke up hanging by my ankles. I was groggy at first but when I looked down it gave me a start because I saw I was hanging what looked like three or four stories from the ground floor of a large hangar of some kind.

The fright made me shake and I started swaying about and noticed that I was still wearing the rags I had on before. I still don’t remember anything before waking up in the dark halls and finding the rooms where I saw men being sexually tortured. That at once inspired a desire in me to escape this place and also, as humiliating as it has been, seemed to also inspire an erection.

I had found myself wearing a black, threadbare t-shirt and leggings that had the legs ripped off so they were like ragged shorts—no shoes. Hanging like I was, my balls and soft penis were lying exposed against my gut because the leggings were so loose fitting they fell down too low to provide coverage from this angle. Even if I tried to pull them back down (up) they would fall back up (down) so I was hanging there by my feet exposed like a piece of meat awaiting the butcher.

Then I felt the falling. The tension just disappeared and I was in free fall. My ragged clothing was billowing out like
useless sails in the rushing air. My hands were free and flailing. I thought maybe I was going to die and as suddenly as it had happened, it stopped and was jerked downward, not hard enough to cause serious injury, but it was disorienting and startl 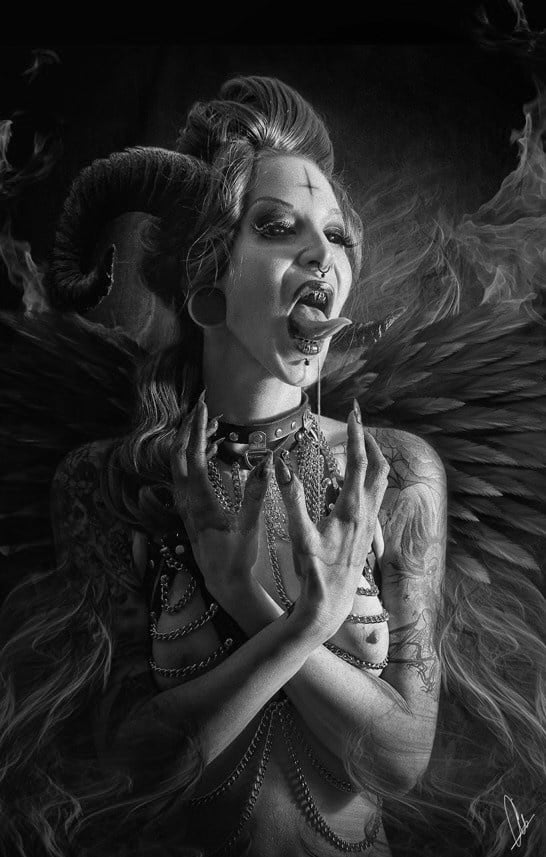 ing to say the least.

Then I thought I was going to have a heart attack. This thing with giant bat wings came hovering over by me. It was almost twice my size and looked to be female. It had circular horns on its head and a long, split tongue and, well, naked breasts protruding from its chest! It reached out to me and stuck a sharp clawed finger (looked to be about 8” long!) down into the leg of the ripped shorts and pulled me over by the stretchy material and turned it’s head upside down and looked me right in the eye and said, “Ah, my new present!”

Ok this was definitely a female, an alluring voice, but also definitely not human. My god where is this place; maybe I’m in Hell!

“Time to unwrap my new semen pump, my babies are hungry!” I could feel her clawed finger slide slowly across my skin as it made its way from the opening of the leggings to the neck of the t-shirt, bunching up the material, and then she paused and said, “I need you denuded,” and jerked her finger down so hard that it ripped the fabric right off my body all at once, yanking me forward sharply and I started swinging again completely stripped!

I watched in horror as the pieces slowly flopped through the air on their way to the floor below. She was taking it all in with a huge, toothy grin, “I just love seeing that expression! Your naked body belongs to me now. I collect sperm for my babies to eat and create more babies so this is a marvelous turn of fortune that I can cream you now!”

Before you got here I was twitching and utterly used up but the sleep has done me some good. She has drained me like this twice now and after the first time, I was able to open the cage and steal back into the lower halls, but she found me and wrung out even more before putting me back here. It doesn’t matter, though, because I now have another idea how we both could escape!

What did she do? Oh god, it was so much pleasure it was like a nightmare. Too much pleasure and humiliation. But just like when I saw those other men, I found myself extremely aroused in spite of it. She squeezed me like a piece of fruit; squeezing the juices out greedily and it seemed as though there was no satisfying her.

I hung there swinging about from the force of the clothes being ripped from my body. She watched me swing and reached out and grabbed one of my free arms and pulled me slightly upright. Then she examined my genitals for a minute before abruptly sucking it all into her mouth at once and culminating in a laborious suckle of my entire limp equipment.

She pressed that long split tongue hard against my junk in her mouth then slid it around, coiling around it, balls and all, like a two headed boa. Flicking and constricting she was suddenly driving me crazy and I simply forgot about everything else as all my now swollen tackle swished and lurched in her mouth. I felt like I was d**gged as she embrangled my whole set of utensils in her hot, slimy mouth.

Before I knew it, my penis was rock hard and I just shot out what seemed like load after load into her throat. I was so out of my head at how good it felt—I mean it felt VERY good! My eyes rolled back in my head and I was reaching out, involuntarily spasming, and I heard myself begin a low moan that followed a wide crescendo up to a full blown shout until I ran out of breath and then shouted some more until I was aware of a stream of drool from my upper lip….

When she was fiercely suckling on my tackle, she was holding both my arms stretched down so I couldn’t move and it popped my back, which actually has felt better than ever since. At one point she pulled a little too hard on my arms, though, and the rope snapped at my ankles, freeing both of them! My sudden weight pulled her down from her hovering position and we fell almost to the floor before she started flapping her wings again. My bare feet touched the ground of the hangar and I was able to start running for a few steps until she lifted me back off the ground.

One of my hands slipped from her grip and I touched the floor again and this time she lost her attitude and I was able to pull free and literally hit the ground running. I made it all the way across the hangar before she swooped down and first got me by my sticky hair, then pulled me up high enough to snag one of my running feet in her claws. She flapped hard skyward and I spun forward and my hands slapped the floor before we went up.

Now she had me by one foot and flew all the way to the ceiling of the hangar. God it was cold flying around naked like that (kind of exhilarating though) and she clasped her other hand on a strut hanging from the ceiling.

“You won’t be able to escape that easily,” she chastised. “Though I must admit you have more spunk than I thought. Get it?”

With that she tossed me up and embraced me with her right arm, I was upside down and while still hanging from the ceiling, she went for my package again. I had shrunk a lot from the cold and prospect of flight and subsequent recapture so she had to work hard to suck my genitals in and cinched her lips around it all and pulled it back from my body. Fuck, I started feeling orgasmic almost immediately.

It was so intense I burst out of her mouth and shot all over her face and those bare breasts. I shot several thick streams for over a minute as she just held me by my leg and just watched, letting some of it fall into her gaping mouth. It got all over me too. It was dripping off her scary face when she just dropped me and again I thought it was over and I was going to hit the floor and die.

She swooped down and caught me again, saying how she was trying to teach me not to get cum on her but in doing so we came close enough to the floor that I was able to break free and run again and this time I made it out of the hangar.
I could hear her bloodcurdling shrieks as she tried to follow me but I guess I lost her. I had to rest when I stopped hearing her yelling and flapping wings behind me and just curled up and held my sore package. My legs were shaking and I was convulsing slightly in a fetal position bare naked on the floor.

I finally got up and continued my search for answers when I found an archive/control room of some kind where I learned what she was and I think I am figuring out what this place might be. If I can get us out of this cage; I think if we find that room again, I can figure out how we can escape.
​