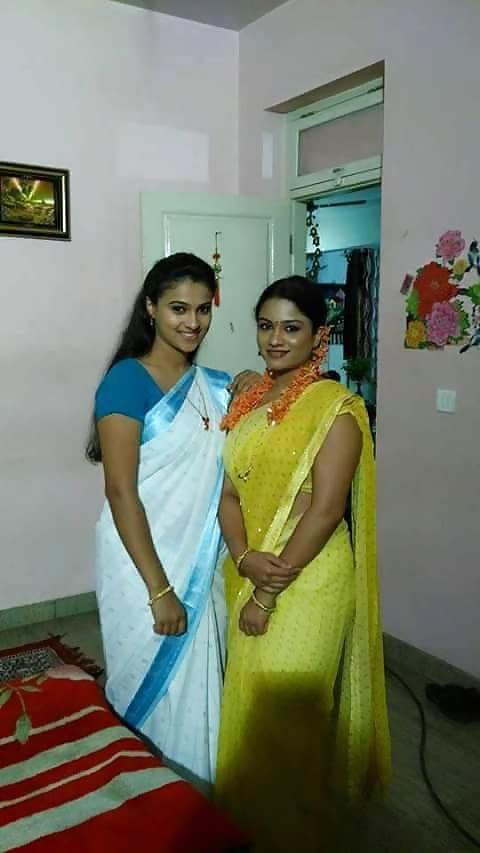 I had managed to get Sudha and Ranjini at my place and was thinking of ways to fuck the mother and daughter. But for my screwed up luck, I had arranged a meeting today with a neighborhood mom(Nalini) by my broker. She came in there and she was shocked to see all of them.

I said, “They are here just for a bath. Please come in and make yourself comfortable.”

She had come here directly from her work and she looked like a manager. I told the three of them that she was my colleague and was here to discuss a project we are working on. They bought that story and we were all sitting on the couch. I got a glimpse of Ranjini’s under the skirt view but it was too dark in there to see.

Meanwhile, Nalini told that she wanted to finish the project work and head back soon because her k** and husband are waiting for her. I got the hint. I went into the room telling all the three of them that they could use the other room to take bath and I’ll finish my work. So I and Nalini went into one room and I asked Nalini.

Me: How long do you have to go home.?
Nalini: I have the whole night dear. I saw you looking at both the mother and daughter. That’s why I got you here to make a plan so that you can get laid with us all.
Me: I already have a plan for that
Nalini: What is it?

I told her about the spy cam I fixed in the loo and that I was going to record them.

Nalini: You idiot if you record them how will you fuck them?
Me: That part I have to figure out still.
Nalini: ok on the live feed video we’ll see how you’ve fit it.

As I turned on the live feed I saw Sudha, Kiran, and Ranjini in the loo checking out the bathtub. It was a perfect spy cam fit. Kiran walked out and Sudha and Ranjini stayed back in. Both me and Nalini were wondering what was happening. Looked like Sudha was video calling someone and the other person picked the call and immediately Ranjini said.

Ranjini: Hi Dad.
Sudha: Hi darling.
Dad: Hello ladies. Where are you both? ?
Sudha: We are at Anto’s place. Look at this bathroom we need to get this done at our place as well.

Dad: Why are you there?
Ranjini: Because our geyser is not working.
Dad: Wow that place looks amazing. Ranjini it reminds me of when I and your mum were on honeymoon.
Ranjini: Missing mom ah?

Dad: Ya baby. I wish I had a glimpse of your mummies sexy shaped parts now. Sudha please dear.
Sudha: Ranjini is here. How can you say that?
Ranjini: Ma dad is missing you it’s ok to show him I won’t see. I will turn around and take bath.
Sudha: Ok dear you turn to the other side I’ll make sure your dad can’t see you to break the mood.

The scene was getting intense and I wanted to see the video chat on my screen and told Nalini if we could do it. She said don’t worry and it was part of her job to hack into video chats and record conversations. She took my laptop and in two minutes the video chat was on our screen.

I could see Sudha taking off her pallu and it was exposing her cleave but her husband was making some eye movements. Sudha was telling no to him. But he was asking more, and finally, Sudha has turned the phone. In the background, Ranjini was pulling her skirt down and we all could see her red with blue flower panties and her tight butt.

Sudha’s husband now pulled his dick out and started stroking it. When Sudha placed the phone in a position where she was seen from top to bottom and in the background, Ranjini was also there. Suddenly Kiran spoke,”What the fuck are you both doing? Anton, you told she was your colleague, but here you both are spying on Sudha and Ranjini?” I said.

Me: Did you notice this is a video chat. Sudha is stripping for her husband and he asked for Ranjini nude too. Hence Sudha is showing both their assets to him and look at him with his cock.

Kiran: Motherfucker, let me get a close look at that. I didn’t know my brother would do this.
Nalini: Ya watch it.
Kiran: Nalini you are so beautiful too see you have lovely assets too.
Nalini: I know, look at your cock now already erect.

Me: Kiran you’ve been fucking the whole day. Let me take care of Nalini.
Nalini: Anto why don’t you both fuck me? I actually have a mild crush on Kiran from the time I saw him. He looks like my boss who fucked me once.

Me: As you wish Nalini. But look in the screen now both Sudha and Ranjini are in their bra and panties. Ranjini is almost about to turn. Ahe is going to catch her dad watching her. OMG, she turned she saw him.

She screamed so loud that Sudha and Ranjini heard it. I got up and went near the loo. They both covered themselves in a towel and opened the door. I asked them if I could come in as I wanted something. Sudha said, “No how could you ask that when two women are in the loo?”

I said, “Please I have to show you something urgent. I won’t see you, ladies. I’ll close my eyes.” They said ok and let me in. As soon as I entered with my closed eyes I pulled my shorts down. I opened my eyes and they were shocked to see me and my huge dick.

I went near the door and locked it from inside. I went to Ranjini and gave my cock in her hand she didn’t know what to do. Sudha came close to help. I pulled her face near mine and smooched her and didn’t let her loose. Initially, she was not ready but I gave my cock now to her and started smooching Ranjini.

Sudha was feeling my cock grow bigger and bigger and she asked me what I wanted. I said I wanted them to get ready and start the sex all over again. They both got ready and I asked them to start off with lesbian sex. I had this weird fantasy of looking up ladies clothes, it’s called upskirts.

Sudha was standing and I went in her saree from under that was a hot site. Now I did the same to Ranjini. While they both were smooching and playing around Ranjini being a bitch peed a little on me and gave me the weirdest idea ever. I turned Sudha around stuck my dick in her pussy and let all my pee in her.

She was getting filled so much and moaning in pain. Before I let go of my dick from her I called Ranjini around and as soon as I was about to stick my dick in her pussy she stopped as said she wanted to be a virgin so I asked her to oil my cock she asked why I asked her to do it.

Sudha got the idea and asked me to go ahead and immediately stuck my dick in Ranjini’s ass she was in pain and crying but I fucked her anyways. I next put my dick in her pussy and she moaned again there was blood on my cock. I had broken her virginity and cummed in her so hard we did it about 7-8 times.
Kiran and Nalini also had a very good time.